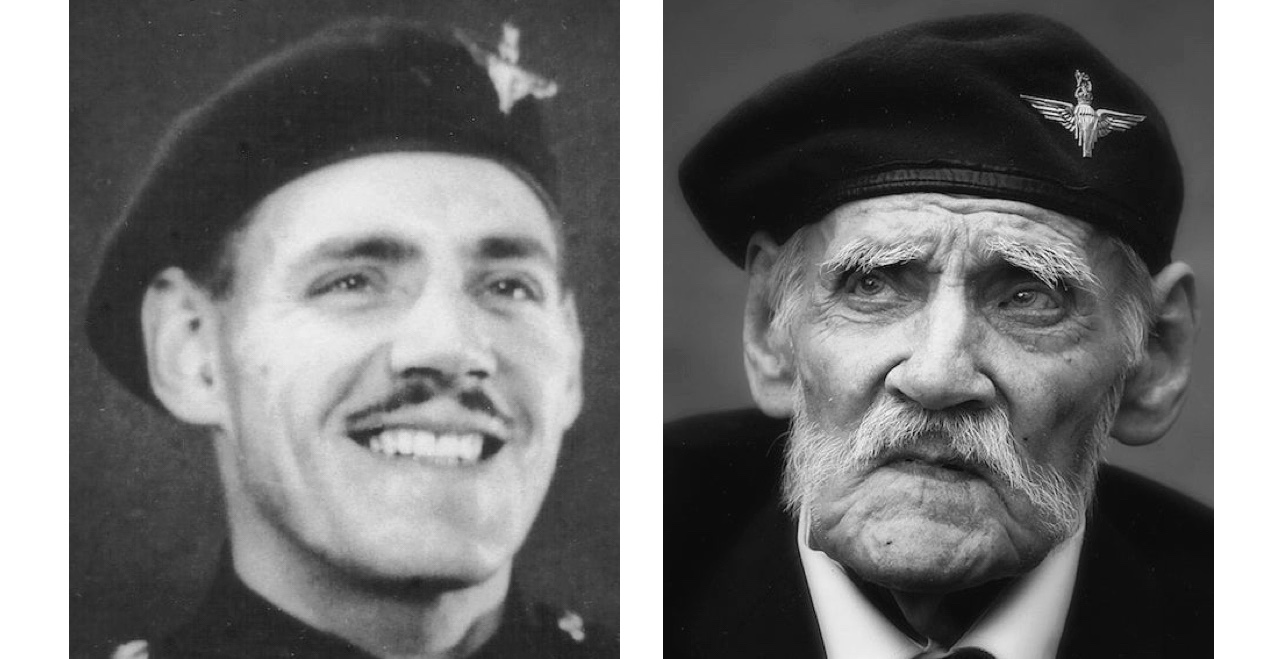 My childhood memories of Reg Curtis are not of a paratrooper but of an important member of my family, a happy, smiling man and the life and soul of the party. Reg was married to my cousin Betty but as they were more than thirty years older than me they were always known as Uncle Reg and Auntie Betty. Reg was very tall and I remember being fascinated by the way his right leg thrust forward and clicked as he walked. At some point I learnt that this was an artificial leg, and later still that he had lost the real one in the war.

Reg and Betty were a kind and welcoming couple and when I spent a week with them at age eleven my memory is of one of the best holidays I ever had. I loved their garden, which to a small child seemed the longest garden in the world. Reg built a new house at the end of that long garden after selling the old house to pay for it. He did most of the work himself whilst he and Betty shared a tiny gipsy caravan on site. Nobody could fail to be impressed by such a man who, despite the loss of a leg, was not only earning a living as a landscape gardener but also building his own house. My brother Mike tells the story of arriving at the new house to see Reg shinning up the roof tiles to fit the chimney pot.

As a boy born in the 1950s I had seen a lot of World War Two memorabilia changing hands, especially in my own back garden where Mike and his friends, six years older than me, conducted a brisk trade in British and German helmets and much more besides. It seems remarkable now that all this stuff was circulating freely but ‘war comics’ were a must-read for every schoolboy and the war itself was still being played out in our imaginations, although it was never taught to me in school and I don’t recall adults ever talking about it.

I knew nothing much about Reg’s military service until he published his first book, Churchill’s Volunteer, by which time I was already 40. I now know that in the intervening years he had been returning regularly to Arnhem, where he had been shot and lost his leg, but it was not until 2004 that I went there with him myself, together with brother Mike, for the 60th Anniversary commemoration of the Battle of Arnhem. It was then that I at last began to understand the significant part that Reg had played in the war. Not that Reg ever described his role as special—he would simply say that he had ‘done his bit’. 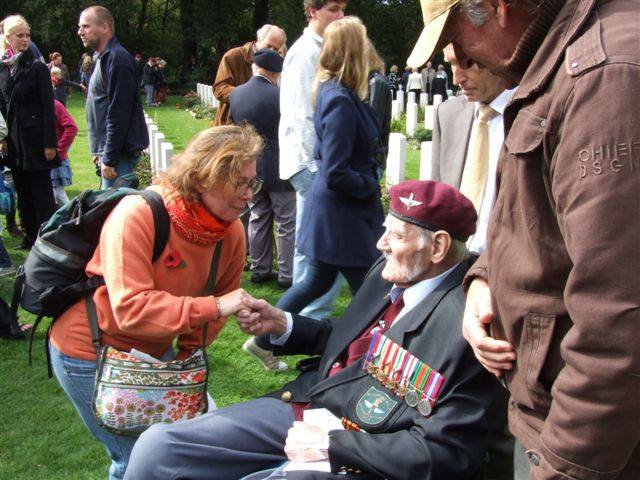 What struck me immediately in Arnhem in 2004 was that Reg was treated with such extraordinary respect, almost reverence, by the local people. My uncle and his fellow Veterans were the centre of attention and people of all ages wanted to speak with them and shake their hands. Here in Arnhem they seemed more important than movie stars and it was a joy to witness this and to see in Reg that the depth of feeling was mutual. To discover that after sixty years such love was felt and friendship treasured was a real eye-opener to me.

Mike and I repeated our journey to Arnhem with Reg four times in subsequent years, our last being for the 70th Anniversary in 2014, and each visit has its special memories. One moment etched in my mind is when pushing Reg’s wheelchair on the pathway by the Airborne Museum in Oosterbeek a woman of Reg’s age suddenly appeared and threw her arms around his neck, greeting him with affection and giving him a gift from ‘an Arnhem girl’. In my mind’s eye, and no doubt in theirs, they were in their twenties back in 1944, though this was now 2010. I gripped the handles of the wheelchair, trying hard not to intrude on their embrace. On another occasion, we were in the Airborne Museum in front of one of the large black and white display photographs and Reg was naming the men depicted. When he named his friend Wally Baldock a woman behind us asked incredulously, “Did you know my father?” She had never known him and this was her first visit to Arnhem. She came to our hotel and talked at length with Reg.

Nothing prepared me for my first Sunday ceremony at the Airborne Cemetery. I had previously only visited cemeteries when people I had known had died and had never attended a mass remembrance. It was clearly going to be a sober occasion and we had dressed accordingly, Reg well turned out with medals on his blazer and wearing his original beret with cap badge polished. With only five minutes to go before the service began, as Mike parked the car I pushed Reg down the grass towards the front where space was reserved for Veterans in wheelchairs. I was serious, concentrating hard and hoping there was a space for him when the voice of one of his pals called out from the gathered ranks: “Reg, you lazy bugger”, followed by much laughter, not least from Reg. I knew I had nothing to worry about. This was their day and the camaraderie didn’t stop just because they were in a cemetery.

Being the 60th Anniversary, it was a bigger than usual affair in 2004, complete with the presence of Prince Charles as Colonel-in-Chief of the Parachute Regiment. But it was the way the local people surrounded the place en masse and the intensity of their appreciation that stood out for me. When it came to the annual laying of flowers by hundreds of schoolchildren, to describe this as a moving experience does not begin to do it justice. Tears ran down my face and at the end of the ceremony as I stood beside Reg while he privately saluted his fallen comrades at the monument, I found it the most poignant moment of all.

When, back in England after our 2010 visit, Reg asked if I would help him prepare a new version of his story, first told in Churchill’s Volunteer, how could I refuse? He wanted to be more concise this time, without all the appendices and with a text accessible to readers of all ages. We worked on it for two years, initially at his kitchen table at home in Chestfield and later for several months at his bedside as he recovered in hospital from a nasty fall. We decided to title the book The Memory Endures, which it most certainly did for Reg. I remember the meeting when he dictated his Author’s Preface, from which some heartfelt words in particular have always touched me deeply:

“Between 1939 and 1945 we took part in the greatest conflict in human history. We won the war, of course, and back home in Britain have now had almost 70 years of peace, for which we can all be grateful. What a shame it is, though, that even the vast scale of suffering we went through was not enough to finally put an end to war itself. I don’t suppose there will ever be one way of agreeing about everything but I can’t help hoping that things will eventually get better for everyone, not just us.”

As far as I can ascertain, at the time of his death in January 2016 Reg was the last surviving member of the original 1st Parachute Battalion, the men who volunteered to join No 2 Commando in 1940, re-designated the 11th SAS Battalion, and which became in 1942 the founding battalion of the Parachute Regiment. Reg and his comrades will forever have that unique place in military history, forged at a time when extreme circumstances called upon them all to do their bit.

Each time we visited Arnhem together I stood beside Reg in front of that monument in the Airborne Cemetery as he gave his personal salute to his lost friends. On the last occasion in 2014, just before I wheeled him there, Reg turned to me and said, “Shall we go and give our salute—we like to do that, don’t we.” To be so included in this his most precious of moments was such an honour. I shall return again and salute my Uncle Reg whose memory for me will always endure.

God bless you Reg and may you truly rest in peace. 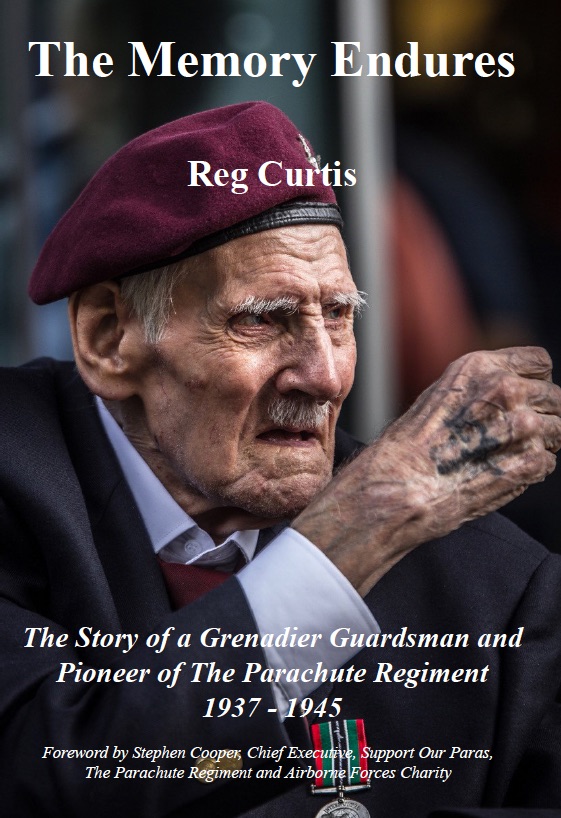 All profits from the sale of the The Memory Endures go to the Reg Curtis Fund to Support Our Paras, administered by Support Our Paras, The Parachute Regiment and Airborne Forces Charity, providing mobility equipment and disability conversion of vehicles, remedial courses to assist those recovering from wounds, vocational courses to help soldiers transition into civilian life, and more. It was Reg’s wish to support soldiers who may now be experiencing circumstances similar to his own, following the amputation of his right leg in 1944, and his support to the Charity continues in his memory. Please click the Reg Curtis Fund link above to see how much has been donated so far. Copies of Reg’s book are only available direct from PilotsPublishing in order to send all the profits to the Charity.