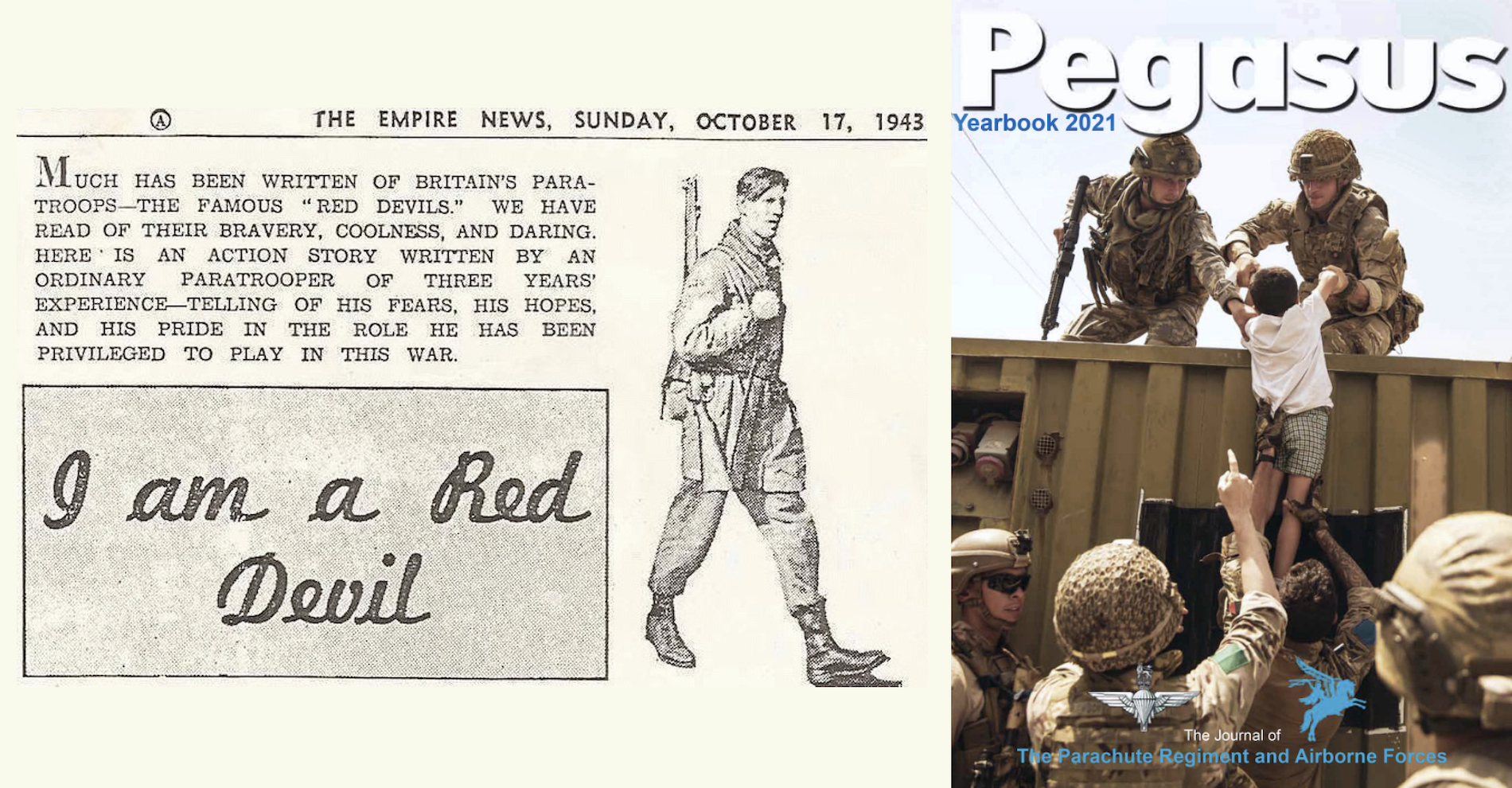 I have no doubt that my late uncle Reg Curtis, a founding member of the Parachute Regiment during WW2, would be more than pleased to be remembered in this year’s Pegasus Yearbook, The Journal of The Parachute Regiment and Airborne Forces. Of all the publications in the world I am sure that Pegasus would be his choice.

I was grateful to be invited to write an article about Reg for the Pegasus Yearbook. On its front cover are members of The Parachute Regiment in August 2021 during Operation Pitting and the evacuation from Hamid Karzai International Airport, Kabul, Afghanistan. The piece I wrote is reprinted with the Journal’s permission below.

Reg was just 20 years old in June 1941 when the photograph above left was taken. He was then a member of the 11th Special Air Service Battalion, Britain’s first battalion of paratroopers, soon to be renamed the 1st Parachute Battalion, leading to the formation of The Parachute Regiment.

By the time Reg’s article ‘I am a Red Devil’ appeared in the Empire News in 1943, two years after the photograph was taken, three quarters of his original battalion had been lost in Tunisia and Sicily, and this was before The Battle of Arnhem in 1944, when their ranks would be reduced still further. The scale of such loss is hard to comprehend.

After living through these unimaginable events it can be no wonder that Reg spent the next 70 years remembering his friends and comrades. His way was to write it down and share their story, which he continued to do until The Memory Endures was first published in 2014.

This year Reg was posthumously awarded The Chairman’s Medal by Lieutenant General Sir John Lorimer, former Colonel Commandant of The Parachute Regiment and Chairman of Support Our Paras. The award is for ‘Achievement Above and Beyond’ in recognition of Reg’s continuing fundraising for Support Our Paras through sales of his book, the proceeds of which he bequeathed in perpetuity to the Charity.

Our family publish The Memory Endures in Reg’s memory, with all profits donated on his behalf to Support Our Paras. It is a privilege to have played a part in the preparation of this book. To be associated with Reg Curtis and in a small way those who served with him is an honour. Their presence is humbling.

To view an enlarged version of the below article as a PDF just click here. 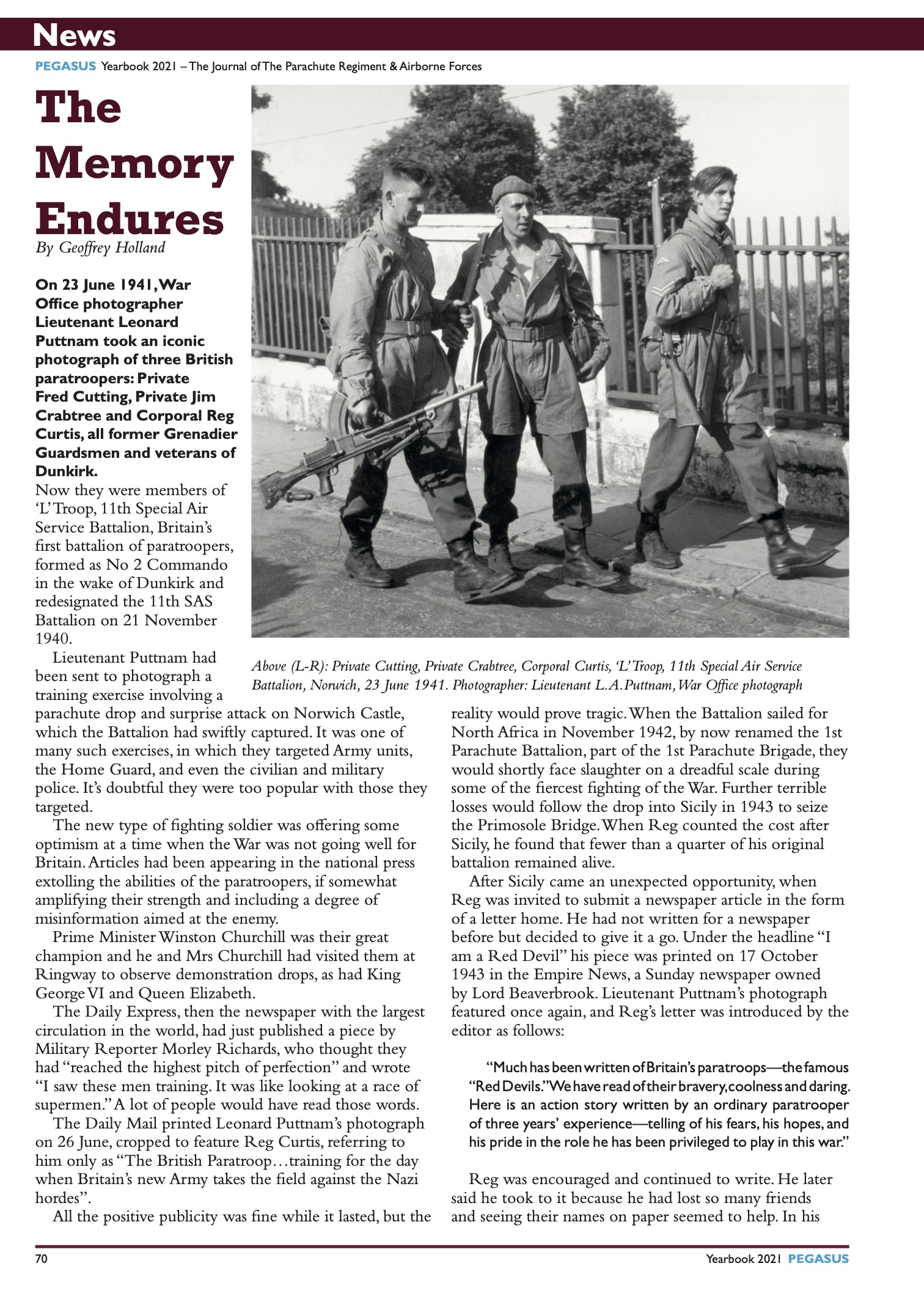 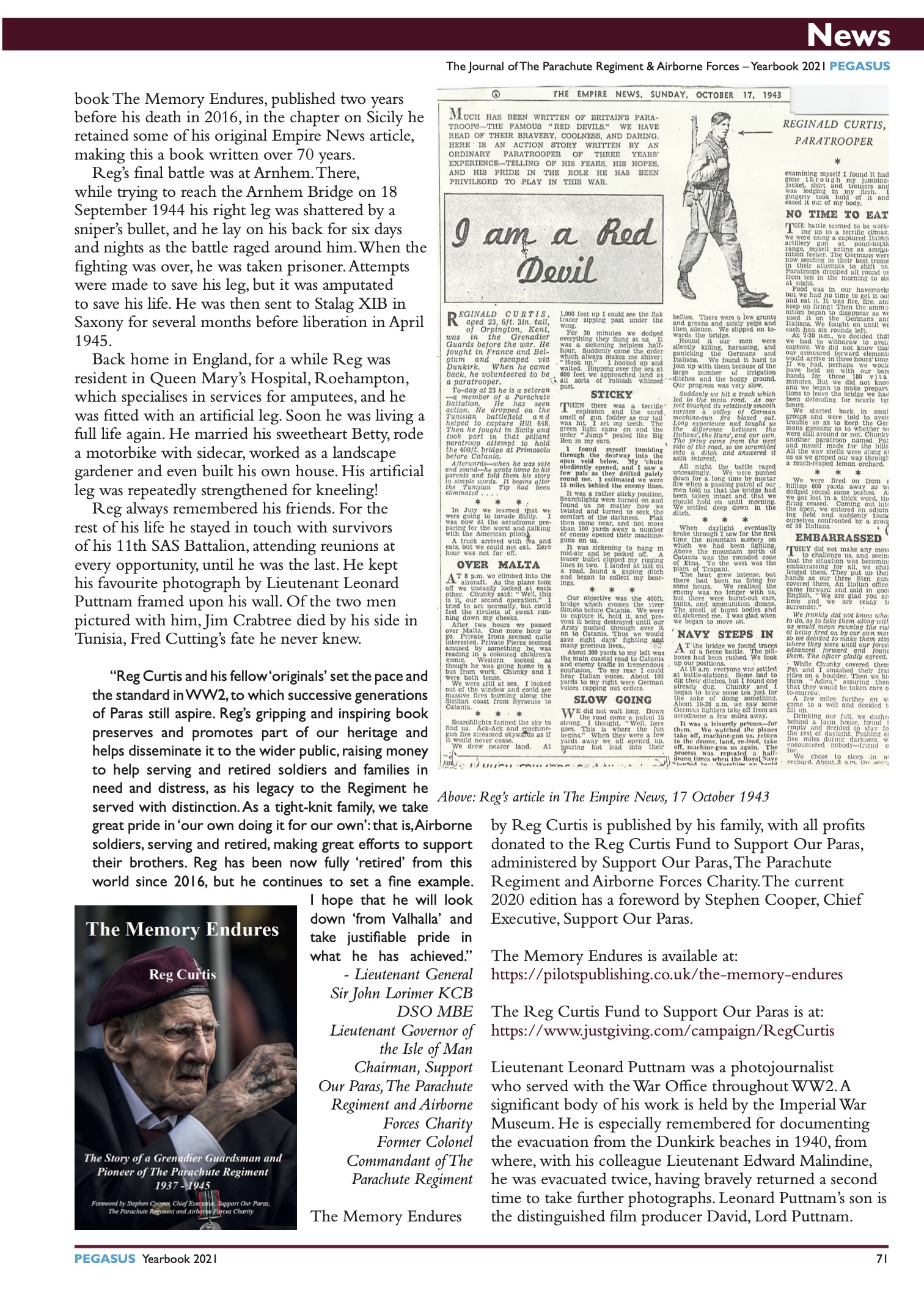 May 30th marks the 100th birthday of Captain Jack Race, the American pilot who flew the Nazi General Alfred Jodl to Rheims on May 6th, 1945 to surrender the Third Reich and thus end WWII in Europe. It was an unlikely role for a young American pilot, but he was following special orders from General Dwight D. Eisenhower and Field Marshall Bernard Montgomery.

In 1944 Jack Race was a US Army Air Force pilot with the 326th Ferrying and Transport Squadron, Ninth Air Force, stationed in England, delivering fighters and medium bombers throughout the UK. Then he was assigned to C-47s and found himself delivering US generals to their destinations. When Eisenhower personally gave Montgomery a C-47, he promised him a pilot too, so Jack joined the British Twenty-first Army Group, “a Pennsylvania Yankee in King George’s service.”

Captain Race flew British top brass back and forth along the front line as they advanced through France and Belgium. But his most important mission by far was flying into Germany with Montgomery’s chief of staff ‘General Freddie’ DeGuingand to collect Jodl and the German surrender delegation in Luneburg and transport them to Rheims to sign the peace treaty. Upon arrival in Luneburg the young pilot watched from the cockpit as DeGuingand approached Jodl and the defeated general extended his hand. “I’m so glad that Gen. Freddie shook his hand,” Jack said. “He was extending his hand in peace.”

When asked about his role in WWII, Captain Race said, “I was glad and proud to serve my country. But war never solves anything. It has been necessary through the ages to set things right, I know, but my hope is that someday differences between people can be settled peacefully, so there will be no more need for war. I know that sounds unrealistic, but it’s my fondest wish.”

After the war, Jack Race became a flight instructor, crop duster, bush pilot, instructor for Afghanistan’s Ariana Airline, consultant to Jordan’s Alia Airline, around-the-world charter pilot, and Pan Am jet captain. With Pan Am he flew DC-4s and DC-6s, was a training pilot, line training captain and DC-8 instructor. When he retired from Pan Am in 1981 he was a 747 captain and had logged 26,000 hours as an airline pilot.

Inspired to fly at the age of six as Charles Lindbergh flew the Atlantic solo for the first time, young Jack “hung on every scratchy word coming over our radio”. Years later when he captained a Pan Am cargo flight with his hero in the jump seat Lindbergh complimented him on making “a very nice landing” in New York. For Jack Race, hearing that “was like getting the Victoria Cross.”

When Captain Race retired from Pan Am, he became Chief Pilot for Project Orbis, a DC-8 jet converted into a state-of-the-art ophthalmic teaching hospital. For five years he flew Western doctors to more than 30 developing countries to teach sight-saving skills to host-country medical personnel. He endorsed Orbis’s goal of sharing knowledge for the good of others to promote peaceful international cooperation and good will. This suited his personal philosophy too, as he had been ordained a Baptist minister in 1981.

In the featured photograph Jack is in his red Waco open-cockpit biplane flying over southern California in 1989, using only a map and compass for navigation as he recreates Lindbergh’s epic 1927 US goodwill tour, a journey of 22,350 miles, with 78 stops in 48 states. Evoking Lindbergh’s plane ‘Spirit of St Louis’, Jack named his own plane ‘Spirit of Orbis’ and talked about Orbis and its sight-saving work at stops along his way.

Replicating Lindbergh’s flight had been a lifelong dream for Jack, but there can be no doubt that the three-month tour was gruelling. Charles Lindbergh was 25 years old when he completed it. Jack Race was 68. Wherever Lindbergh touched down, crowds gathered and heard him speak about the future of aviation. Wherever Jack touched down, crowds gathered as he spoke of Orbis and its work to benefit humanity.

By any aviation standards, the career of Captain Jack Race has been distinguished. Inevitably, one flight in 1945 to end the greatest war in human history stands out among them all.

God bless you Jack. May you have a very happy 100th birthday and many more to come.

With thanks to Holly Peppe, former Orbis Director of External Affairs, who assisted in the preparation of this article and treasures her many years of friendship with Jack.